If you thought you’d seen it all – think again.

This incredible new house in Wannanup, a suburb outside of Mandurah, takes motorised blinds to a whole new level. But that’s only where this story begins.

So, where should we start? Well, maybe the bath. And I’m sure you’ve already worked out that this isn’t any kind of bath, it’s actually a two of kind in the whole world kind of bath.

The other we’re told is owned by none other than Australian actress Cate Blanchett.

So obviously when you have a bath of this kind of stature it must go into its own room, and it simply must be surrounded by CurtainWorld motorised blinds.

The whole setup seems like it’s out of a Star Trek movie as the blue ambient light creates an almost intergalactic tone. 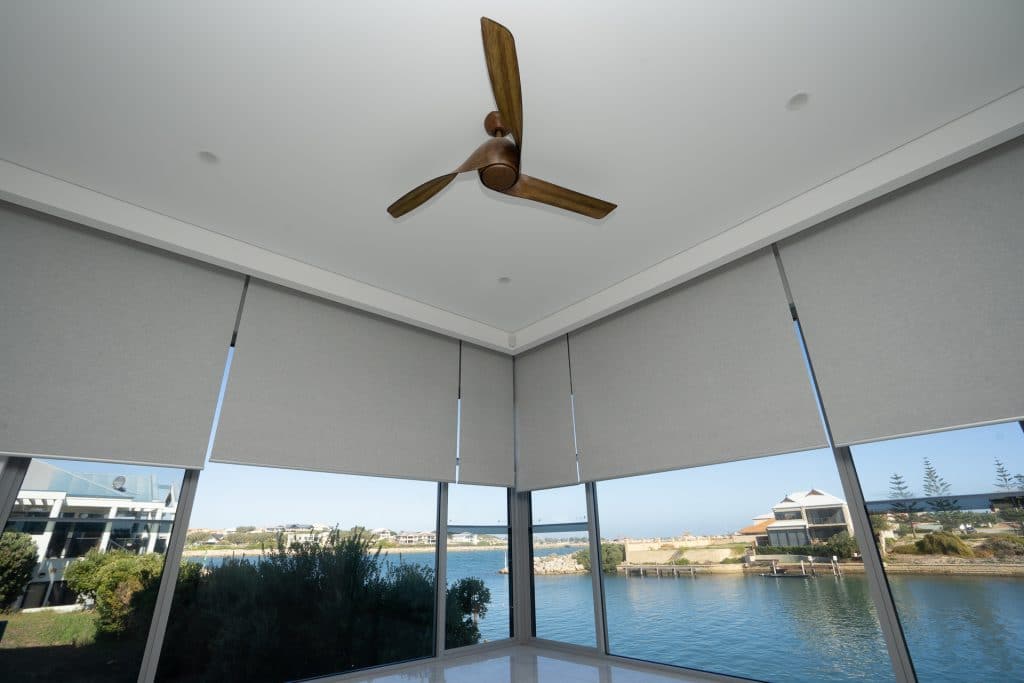 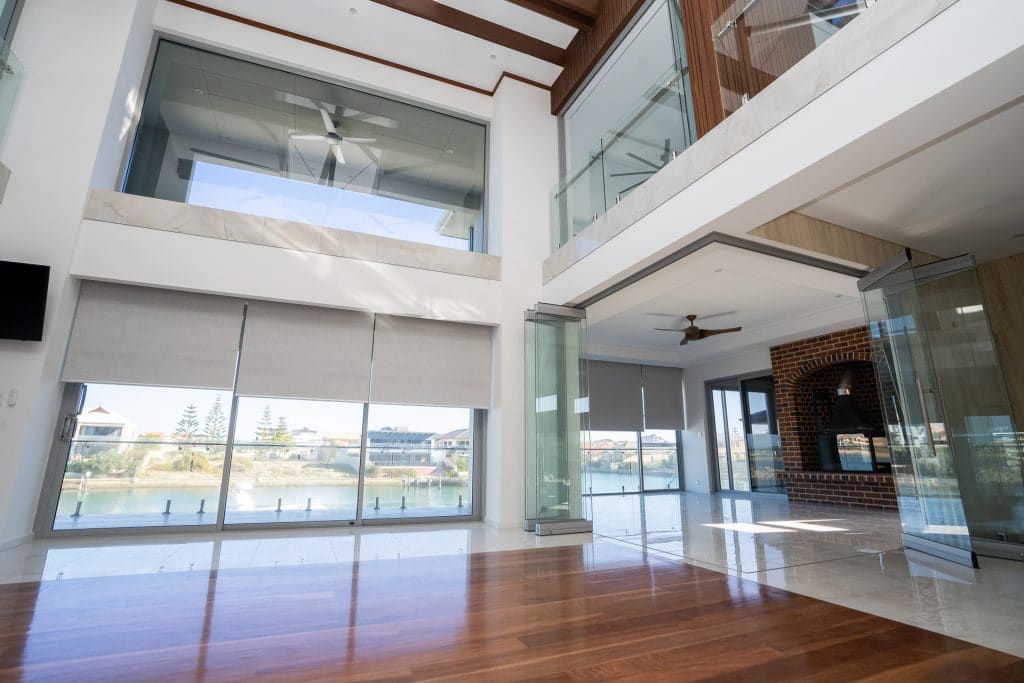 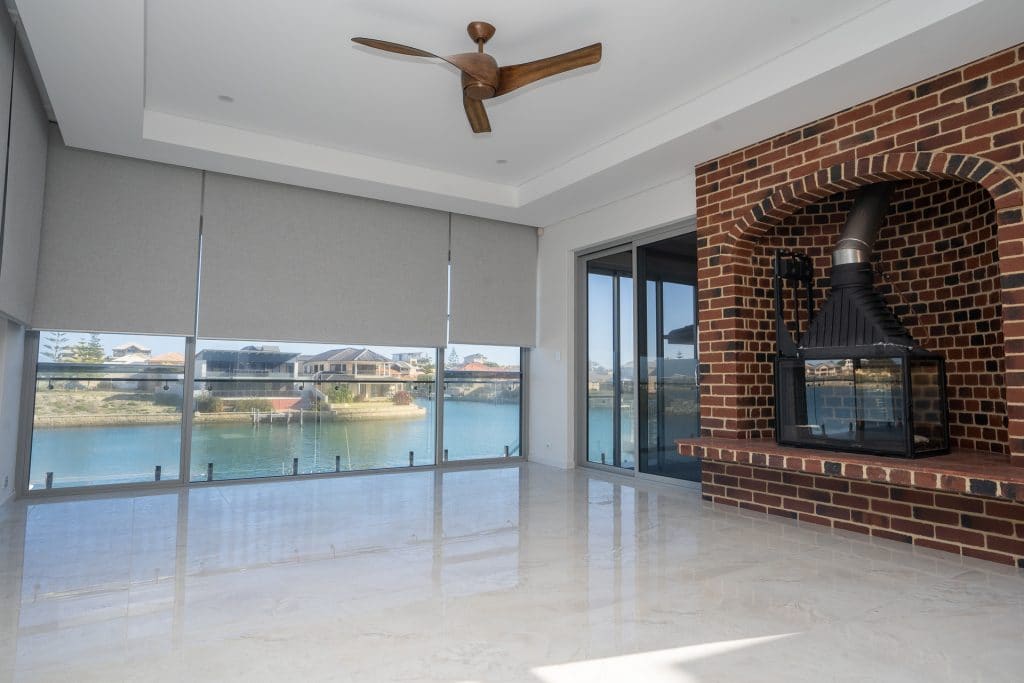 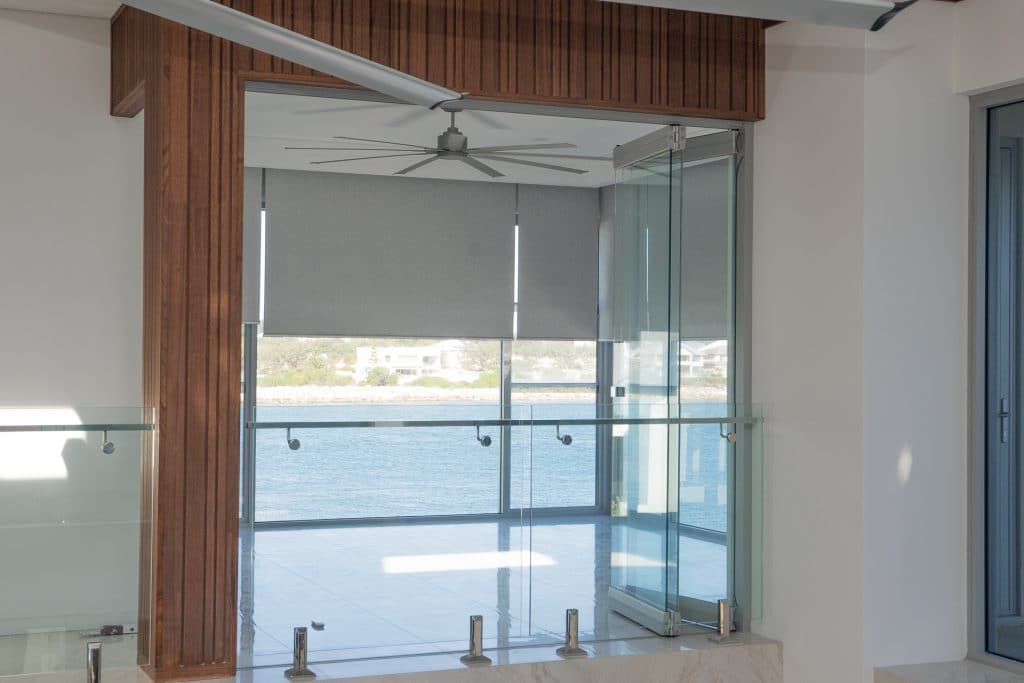 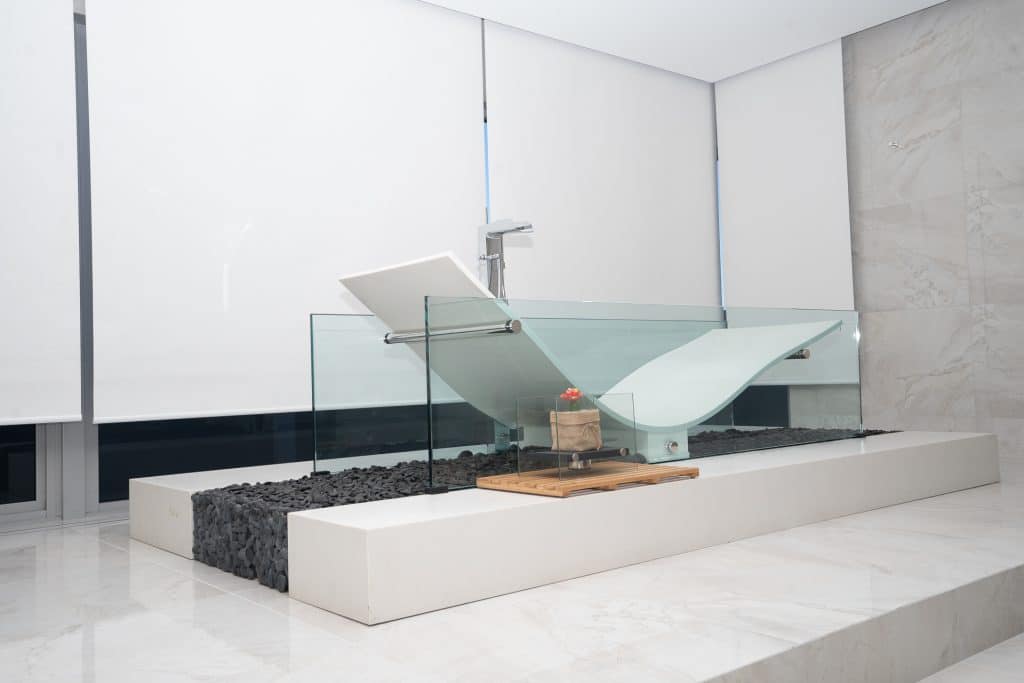 We could probably just look at this bath for hours, but there’s much more to see.

The house is positioned on the edge of the Dawesville Channel which constantly has friendly neighbourhood dolphins swimming past saying G’day. And when the Somfy Motorised Blinds are fully up, the view is pretty hard to beat.

The living room, dining, main bedroom, and library all overlook the channel and each have their own motorisation capabilities. Perfect for privacy and of course opening up your world to the incredible view.

In other rooms of the house you’ll find plantation shutters, including one that adorns the top of the stairs and looks quite the feature next to the elevator. Yes, the elevator. 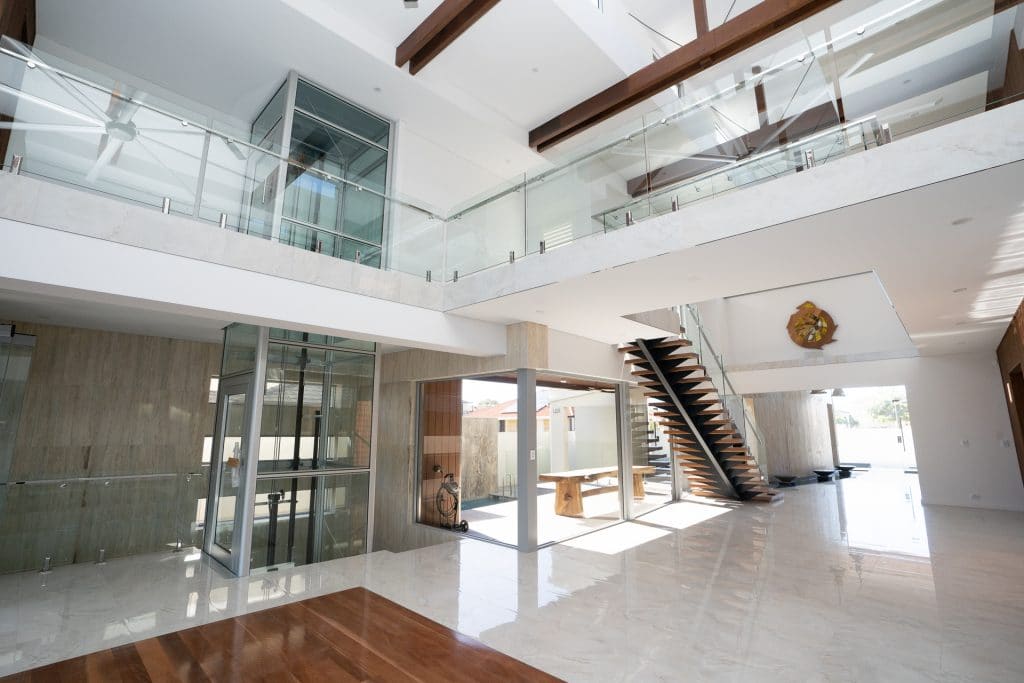 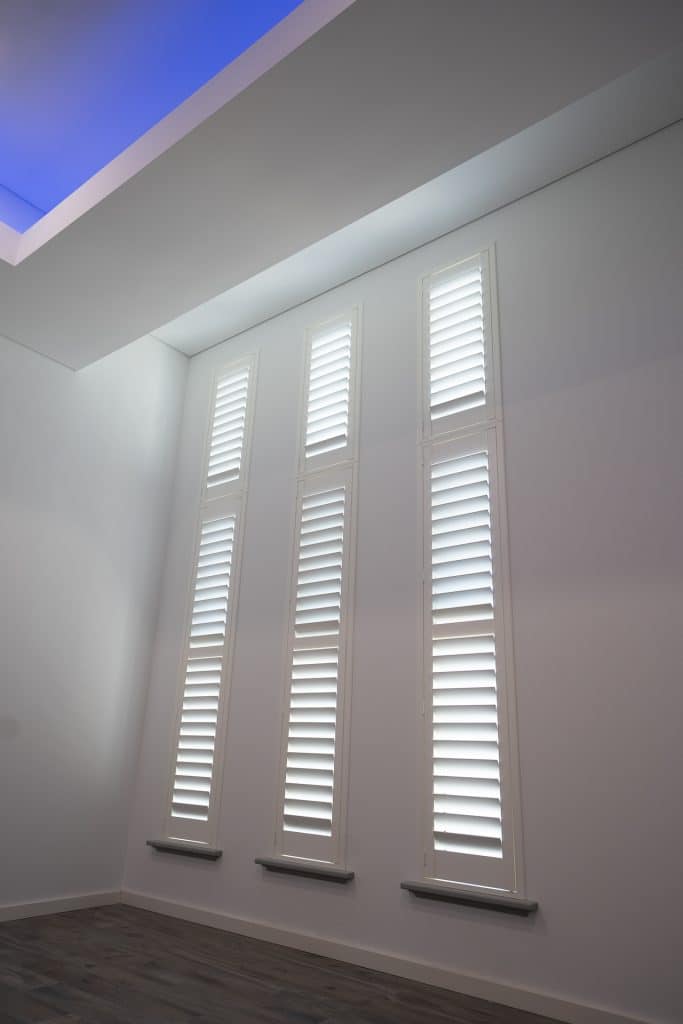 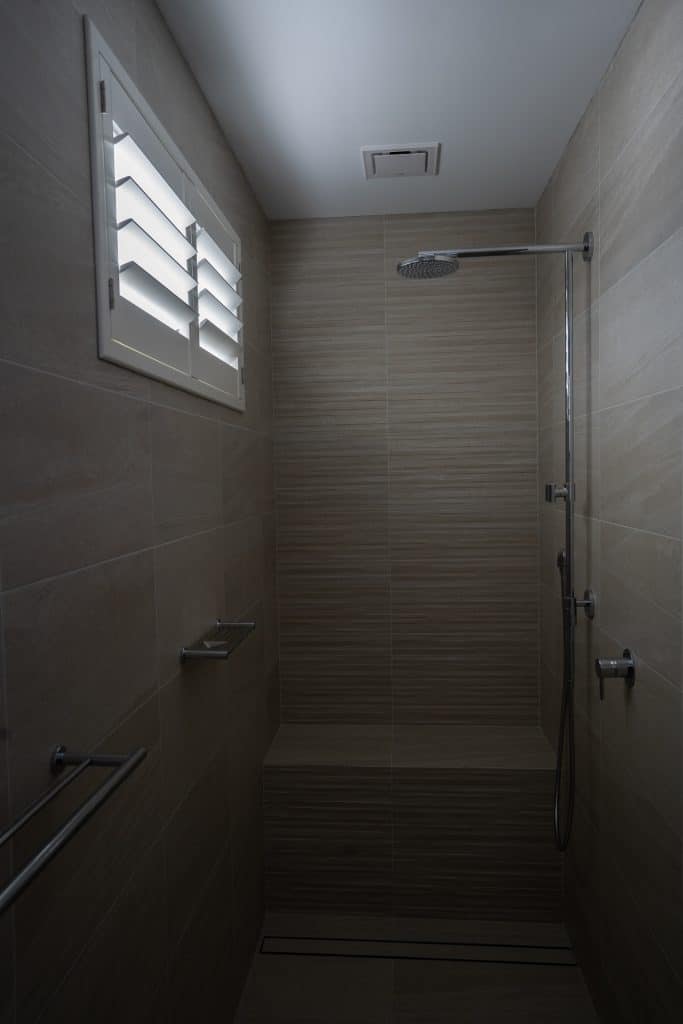 If you were to head downstairs to the basement you’ll find what every house of this nature needs. A man cave. And despite the rest of the houses opulence, the man cave has gone a bit more classic with traditional Vertical Blinds with sewn in weighted hems.

Juxtaposed to the red brick the Verticals stand out brilliantly and will be enjoyed by guests when the first keg is tapped in.

There is so much wow factor about this house that our jaws are actually starting to hurt. We’re glad we could add to it!

See more of our other great projects

In light of the ongoing developments with the COVID-19 Virus, the CurtainWorld team want to assure our valued customers of the various safety measures being undertaken to make sure you are as safe as possible.

It’s the scariest time of the year when five-foot ghosts and goblins roam the streets in search of a sugar fix that will keep them up past their usual bedtime.

Embrace International Colour Trends to Decorate Your Home This Summer

With international colour and trend forecasts only one click away it has never been easier to find inspiration if you are looking to renovate, redecorate, or spruce up a room.

This apartment in South Perth boasts magnificent views of the city once our blockout curtains are pulled back.